We are not a club or society, and there is no charge for “membership”. The Veterans we support have already paid by serving their country, often with pain and occasionally in blood. The Bound by Veterans courses are free to all those who have been discharged early from the Services because of their wounds, injuries or sickness (WIS). We also support spouses and partners of WIS veterans, as well as any WIS who are in transition awaiting a medical board. 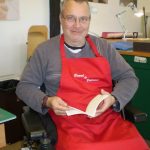 Stefan tests out his wheelchair maneuverability  at the bench

Since we started seven years ago almost 550 veterans have completed our introductory courses and/or City & Guilds Level 1 and 2 qualifications. In 2019 a Bound by Veterans student, Wendy Lagden (ex RN), became the first person in the UK to achieve a City & Guilds Level 3 Diploma in Bookbinding. We are immensely proud of her achievement in this demanding course.

Wendy with her Level 3 Diploma in December 2019

Other students in BBV are also enrolled on the Level 3 Course and are working towards a Diploma.

The benefits of bookbinding can be best understood through the testamonials of some of the WIS students: